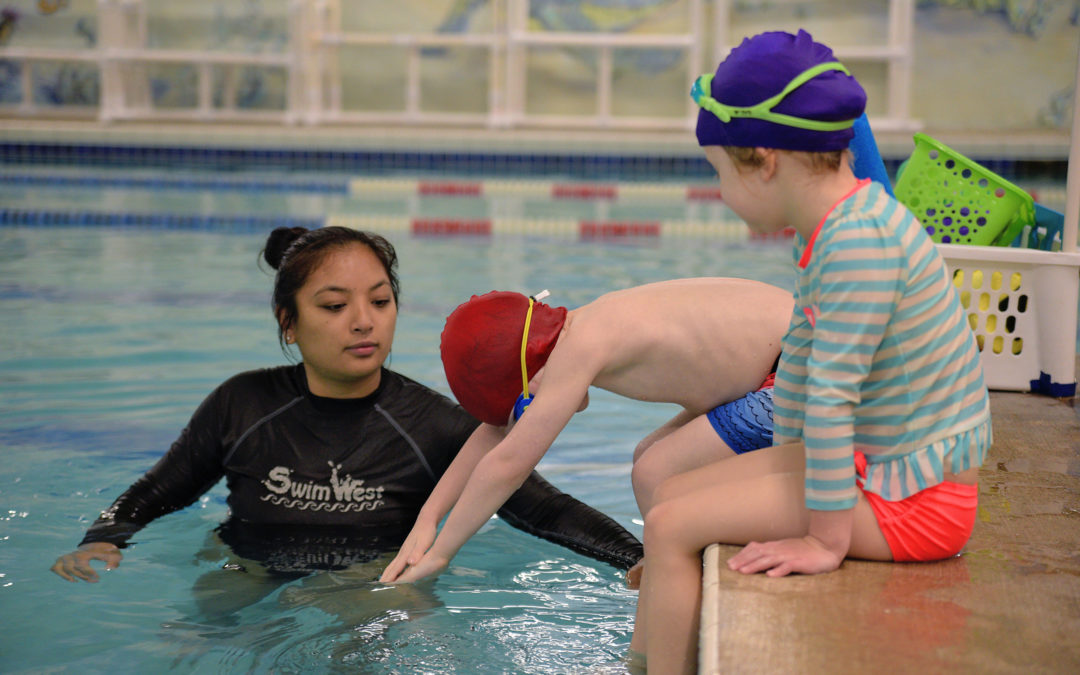 My son is 9. He has been swimming at SwimWest since he was literally in (swim) diapers. We started when we first moved to the Madison area 8 years ago, and we have continued ever since. He has progressed from Parent-Tot to the stairs to the side platforms and now, finally, to the lap lanes. He’s a Shark, which means he has completed every level SwimWest offers, and reaching that milestone has led us to question whether he really needs to continue his lessons.

At this point, my son is an excellent swimmer. I feel relatively safe while we are at the local pool, and I know he is proficient at each of the swim strokes. So…what’s next? Has his learning reached its peak? Is there anywhere else to go, or do we hang up the swim shorts and say he’s learned enough?

While my son is a Shark, there are peaks and plateaus for kids at every level…and it’s totally normal and reasonable to wonder if continuing swim lessons is necessary when it feels like your child isn’t progressing or learning anything “new”. Since we’ve been a SwimWest family for quite a long time, I’ve seen these plateaus for exactly what they are: moments in time that will likely pass. My son was “stuck” in Seal for what felt like YEARS (it wasn’t) and it seemed like the plateau was never going to end. But it did…and he kept moving up levels after that, and his skills kept on building and growing.

So. What’s the solution to a child that is “stuck” and doesn’t seem to be learning or progressing in swim? It truly depends on the child. There are absolutely reasons to stop lessons for a bit and restart later on. Maybe your child needs a break. Maybe the teacher isn’t a good fit. Maybe your child is too tired after long days of school. Whatever “it” is, there are plenty of reasons to take a break, and as a parent, you know if that’s what needed.

On the flip side, sometimes you just have to power through it, and trust that there will be a breakthrough of some kind. Lessons, particularly as your child gets older and progresses further, are about skill refinement. The learning doesn’t look as drastic as those early beginner classes, when every week they did something “new”. But I promise you, they ARE learning – maybe it’s endurance? Maybe it’s stronger kicks? Maybe it’s faster times?

Back to my Shark. We are going to keep him in lessons this year, even though it does feel at times like he has plateaued. He loves lessons, and swimming for 60 minutes is excellent exercise. And I know his strokes are getting more refined, his times are improving and he truly loves the water. At this point in his swim “life”, we will follow his lead and let him make the call on whether he wants to continue or not.

I wish I had all the answers, but I truly believe that kids who seem like they “plateaued” are on the brink of a breakthrough. When that happens, you’ll see them improve in new strokes, skills or confidence. It may take a few weeks or months, but eventually they will start showing signs of improvement. And if not, you can always take a break and come back again.

How much is too much? Choosing activities for the school year

15 Things we LOVE About SwimWest

Know Before you Go: Staying Safe on the Ice this Winter